“An Evening With Whitney,” a holographic touring revue of Whitney Houston’s music, will come to the States later this year.

In a darkened warehouse in North Hollywood, Whitney Houston stood before a small audience, dressed in a fringed orange body suit, and told off an unfaithful lover in her lithe but growly 1999 R&B jam “It’s Not Right but It’s Okay.”

The voice was recognizably that of one of pop music’s greatest singers; the costume’s fringe swayed in a lifelike manner as the body beneath it moved across a stage. But just when you were thinking about letting yourself buy into the idea that Houston, who died in 2012, was somehow performing in front of you, she uttered a few words that disrupted the illusion.

For the next part of her act, the superstar entertainer said, she wanted to sing a few songs “from the movies that I did” — not “the movies that I’ve done,” as a living (and still-ambitious) artist would surely have put it. The curious phrasing, with its eerie suggestion of a look back from beyond the grave, suddenly reminded you that who you were watching — what you were watching — was a hologram painstakingly designed years after Houston’s shocking death at age 48.

The concert on a recent afternoon was a preview of a splashy touring production set to launch Tuesday in Sheffield, England. Called “An Evening With Whitney,” the show — developed by Los Angeles-based Base Hologram in cooperation with the late singer’s estate — has the Whitney hologram performing many of Houston’s signature hits, including “How Will I Know” and “I Will Always Love You,” with live accompaniment from a band and several dancers.

It follows Base productions built around holograms of Buddy Holly, Roy Orbison and legendary opera singer Maria Callas; before those, other companies in the same field brought a Tupac Shakur hologram to the Coachella festival in 2012 and a moonwalking Michael Jackson hologram to the Billboard Music Awards in 2014. 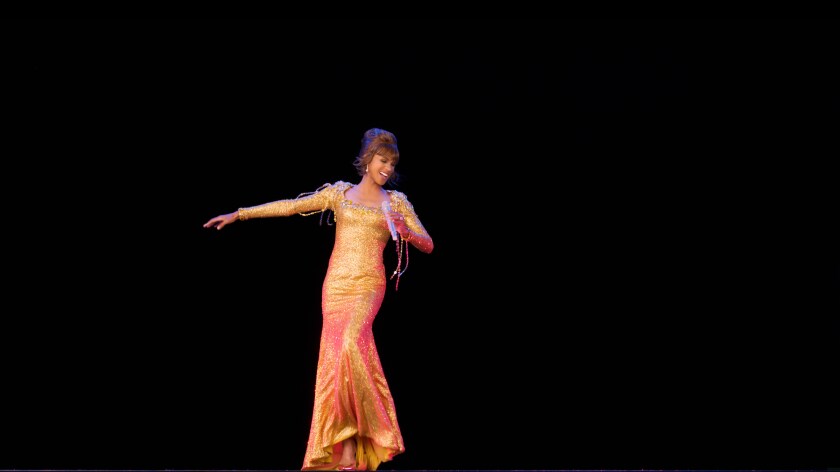 Whitney Houston, in hologram.
(Base Hologram)

But if solid ticket sales for Base’s earlier shows reflect a surprising demand for this type of entertainment, “An Evening With Whitney” feels like an untested proposition, thanks in part to Houston’s A-list status. (She’s by far the biggest name yet to receive the full-concert hologram treatment.) More important, Houston — unlike stars who’ve been dead for decades — is well within living memory as a performer; countless music videos and television appearances, all easily available on YouTube, only bolster our familiarity with her presence and style.

Which means the stakes are higher for the Whitney hologram — one reason, no doubt, that Base hired well-respected director and choreographer Fatima Robinson, who worked with Houston while she was alive, to oversee “An Evening With Whitney.” After the preview this month, Robinson said she spent 12 weeks coaching a body double (whose movements were filmed to form the basis of the hologram) in an attempt to “capture the essence” of Houston; the singer’s family members, she added, were “hardcore” in their feedback regarding “the things Whitney would do or wouldn’t do” onstage. “‘Oh, Whitney didn’t raise her hand past this certain point,’” Robinson recalled hearing with a laugh.

To source Houston’s vocals, the show’s musical director, Keith Harris, described combing through old recordings of live gigs, excerpts of which he blended with studio outtakes to create new performances. And Base brought on Timothy Snell, who like Robinson had experience working with the real Houston, to design the hologram’s virtual outfits.

The result, at least in what producers were careful to call a dress rehearsal, is intermittently convincing. The hologram gets some of Houston’s physical tics right, and the lip-syncing — if that’s the right word for it — looks pretty real; detailed visual touches like that rippling fringe aid in the suspension of your disbelief. It certainly helps too that the live band cooks, nowhere more so than in a deeply funky rendition of “I Wanna Dance With Somebody (Who Loves Me),” as perfect a pop song as exists. To sit in a theater and hear that tune played at a very high volume, even with Base’s vaguely creepy tricknology, is a treat all its own.

Yet the between-song banter is awkward at best, and you never quite shake your awareness that the hologram, which relies on projectors, is clearly hemmed into a space at the center of the stage. As Robinson pointed out, Houston wasn’t known as a dancer. But she did more than plant herself behind a microphone.

With its over-the-top premise and its under-two-hours run time, “An Evening With Whitney” would probably play well in Las Vegas, where indeed there’s word that the show may land this year. Yet Base Chief Executive Marty Tudor says he’s aiming to tour the production in the United States following European dates scheduled through April — indication of a hunger for prestige that this show seems somewhat underequipped to satisfy.

For the singer’s sister-in-law Pat Houston — who controls the Whitney estate along with Primary Wave, a New York marketing agency that specializes in monetizing the catalogs of aging and deceased artists — the hologram tour is just one of the ways she’s hoping to bring fresh attention to Whitney’s music. Last year, RCA Records released a single that had Norwegian producer Kygo building a new track around a previously unused recording of Houston singing Steve Winwood’s mid-’80s pop-soul hit “Higher Love”; on Spotify and YouTube, it’s racked up more than 300 million streams.

There’s also talk of a jukebox musical and a big-screen biopic that Clive Davis, who signed Houston to his Arista label, recently told The Times he’s begun putting together with an eye on celebrating her musical “genius” as opposed to digging into the complications of her drug abuse and her romantic life. Last month, the Rock & Roll Hall of Fame announced that Houston would be inducted in a ceremony set to take place in May.

“It’s been eight years since her passing, and it’s been very difficult trying to proceed with projects,” Pat Houston told reporters after the preview. But now, she added, is the time for a “fresh perspective” on the singer’s legacy. Her comments felt like her attempt to get out in front of any criticism of the hologram, which is ripe for it, even though Houston tried to present the idea of the hologram as Whitney’s own.

She spoke of the singer’s final tour of Europe, during which her show included an “unplugged”-style segment with Whitney and just a few musicians — a setup she hoped to duplicate in the U.S., Pat Houston said, and one not unlike that in the relatively intimate “Evening.”

“So that’s the connection,” Pat said. “This isn’t something that we’re just putting together. This is something that she wanted to do.” She said she got emotional watching the preview because it came “so, so close” — never mind the unsettling digital phantom — to what the singer had envisioned.

“The only thing missing,” she added, “is her, physically.”
Source: LATimes