Colour-changing ink on the seat fabric could inform passengers that the cabin has just been cleaned, and unhygienic elements such as pockets would be removed from seatbacks.

"However, as the virus is invisible, we've taken into consideration passengers' needs for reassurance while boarding."

If UVC light and heat was used to clean the cabin, photochromic and thermochromic inks on fabric surfaces would react to these cleaning methods and broadcast a "message of reassurance". These would be visible during boarding and fade once passengers are seated.

Multi-coloured lighting could be used to reassure passengers. Cyan – the colour of UV light – and purple would signal the cleaning process, before changing to warmer shades of peach and yellow during the flight.

"It's not just an opportunity, it's a necessity," said Goode.

"The cabin interiors are actually one of the safest parts of the travel journey, which is in part to do with air supply and filtration, but the perception for passengers is often the opposite because it's a small, contained environment. So we need to use design to help alleviate that passenger anxiety, and make passengers feel reassured," he said. 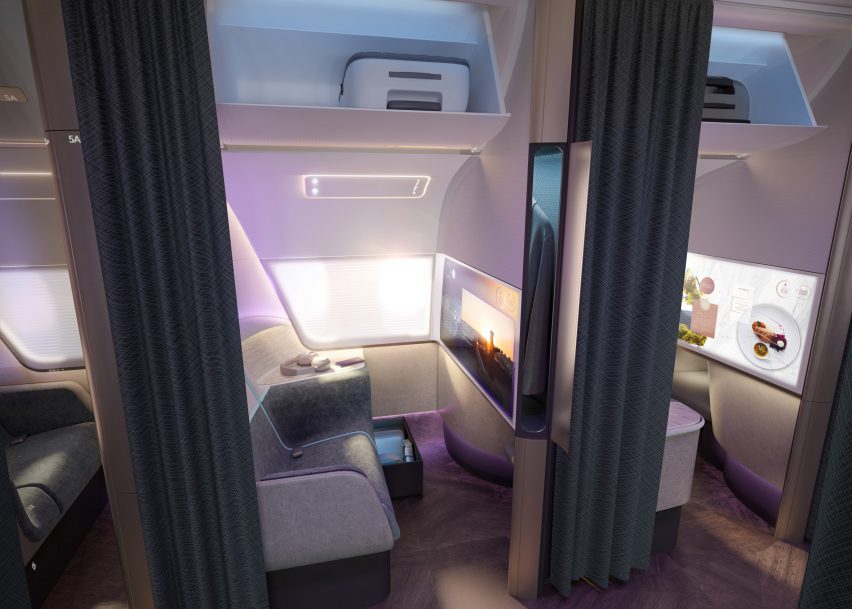 By redesigning aeroplane cabins from the ground up PriestmanGoode hopes to improve existing inefficiencies.

"It's an opportunity to re-think some of the things that we've accepted as the norm but are not necessarily optimised for today's passengers," said Goode.

Removing in-flight entertainment screens from the backs of seats would lose a potentially germ-harbouring surface and reduce the weight of the craft – lessening fuel consumption and emissions.

"Most passengers today though have personal devices that they use to watch content, so if you can supply entertainment that users can watch through their own device, you're able to meet passenger expectations," said Goode. 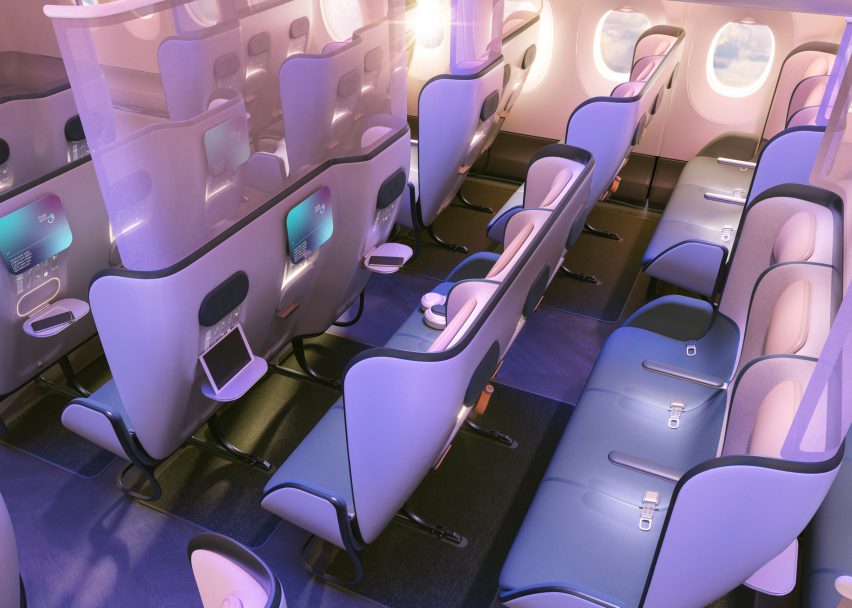 The Pure Skies concept does away with the traditional class-based seating system. Business-class seats would be "rooms" and economy seats would be called "zones".

"We felt the idea of class was dated," Goode told Dezeen. "Going forward, 'business class' passengers are more likely to be people travelling for leisure who have the means for a more private, enclosed 'room'."

Changing the name economy to zone reflects the way the Pure Skies cabin is broken into small sections.

"This helps passenger anxiety," said Goode. "It highlights the fact you're travelling in small zones rather than one large cabin"

Zone seats could be priced according to things such as extra legroom. 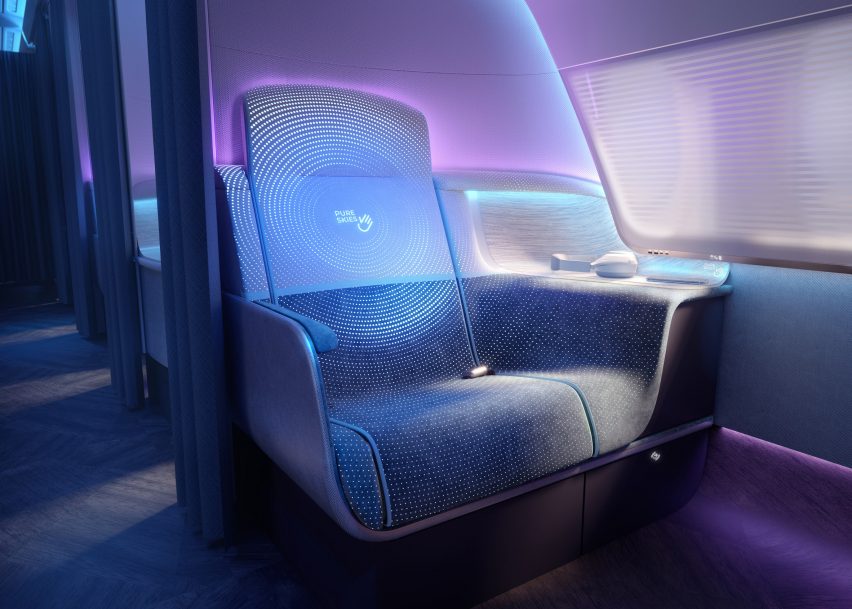 In the Pure Skies rooms, each seat could be sectioned off with full-height curtains. Antimicrobial materials and finishes would be embedded within the surfaces and seat fabrics.

Each room would have a gesture-controlled IFE system that could be synced to the passenger's own devices to be touch-free. Redesigned seats would have minimal split lines and welded-fabric seams. 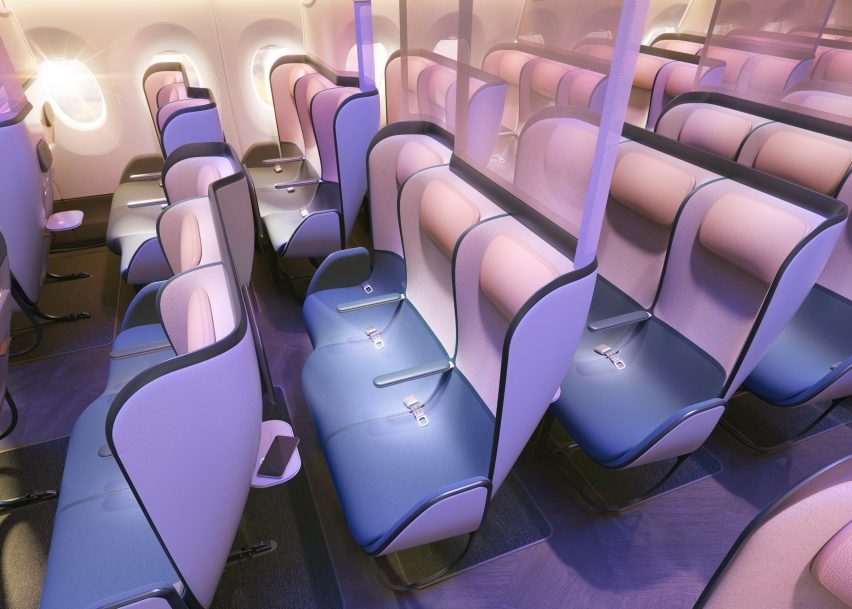 In the Pure Skies zones, dividing screens on top of seats on every other row would separate passengers. Seatback shells would have no gaps to trap dirt, and in place of literature pockets there could be removable bags or a system for passengers to clip on their own bag.

Seat-back trays would be replaced with clip-on trays added directly from the attendant's trolley. IFE screens would be removed in favour of passengers using their own devices, with options for travellers to hire one.

The chair's reclining mechanism – typically controlled with a round button on the armrest – would be set within the fabric skin of the seat, to avoid any hard-to-clean gaps. 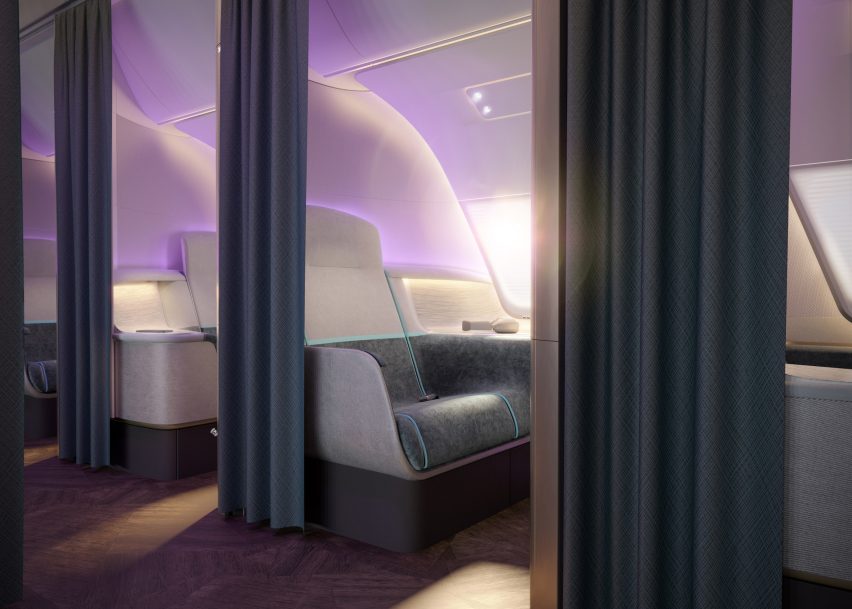 PriestmanGoode predicts it will take at least three years to develop and certify future cabin designs.

The studio has also developed a design for trains after the pandemic, and produced a concept for a high-performance balloon and pressurised capsule that would take space tourists on a journey to the edge of space.